barber of seville homepage
back to cast 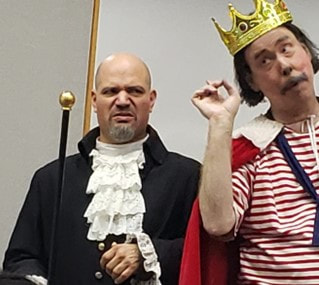 From 1985-87 he attended the Preparatory Division of the Manhattan School of Music studying classical voice with Ilse Sasse and Lynne Vardeman. After a “brief” hiatus, he performed from 2013 to 2016 with the Waldorf Choral Society as both chorister and soloist. Since 2016, Chris has appeared in a variety of roles with the Gilbert & Sullivan Light Opera Company of Long Island (GaSLOCoLI), including Lord Tolloler (Iolanthe, 2016), The Pirate King (The Pirates of Penzance, 2017), Colonel Calverly (Patience, 2018), Don Alhambra (The Gondoliers; 2019), Ghost of Marley (A Gilbert & Sullivan Christmas Carol, 2019), and “The Baritone” (The World According to Gilbert & Sullivan, 2016-19).

This season he has performed with the New York Gilbert & Sullivan Society as Captain Corcoran in a concert version of HMS Pinafore, and again with GaSLOCoLI as the Mikado in The Mikado: A Long Island Fantasy.

Chris works professionally as a Physical Therapist, specializing in the treatment of performing artists using an integration of Osteopathic manual and holistic movement therapies. In his spare time he teaches Tai Chi & Qi Gong and enjoys updating the lyrics to G&S songs.